Evolutionary dynamics in the human microbiome

Unlike our own genomes, which change little over our lifetimes, the human microbiome experiences a plethora of new mutations daily, and thus has the potential to evolve rapidly. This genetic dynamism is both an opportunity (enabling digestion of new foods) and a challenge (the evolution of drug resistance). To understand how the human gut microbiome evolves over time, in our recent work, we quantified the evolutionary dynamics of roughly 40 prevalent species of gut bacteria. We found that gut bacteria can evolve in humans in the space of just six months, but that over our lifetimes, the bacteria inside us are completely replaced. These results suggest that gut bacteria can evolve on timescales relevant to our health, but that they do not become so personalized that they cannot be replaced. Simply uncovering evidence for evolution in the microbiome is just the start to fully characterizing the extent and limitations of evolution in this complex community. With a bounty of genetic variation, evolutionary inquiry in the human microbiome is an exciting frontier for future research, with important biomedical implications. Some of the questions we are pursuing include: 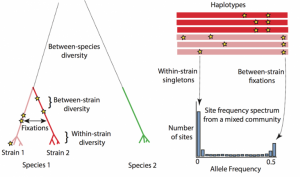 With the availability of fully sequenced whole genome data, especially from natural populations, many of our assumptions about molecular evolution have been challenged. For example, it has long been assumed that natural selection can be slow and infrequent, resulting in signatures of hard sweeps. We developed haplotype statistics to detect and classify hard and soft selective sweeps in fully sequenced whole genomes. Applying these statistics to natural populations of D. melanogaster revealed abundant soft selective sweeps, suggesting that adaptation can in fact be rapid. Several questions remain based on this work, including: 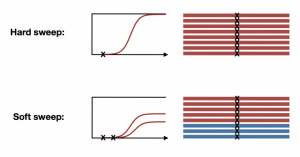