Adaptation is a process by which species evolve to become more fit in their environment. The effects of adaptation are apparent in all aspects of life. A particularly deadly example is the adaptation experienced by the HIV virus. If it were not for the high mutation rate in HIV and its resulting resistance to anti-viral drugs, AIDS would not be more dangerous than a mere fever! A better understanding of the dynamics of adaptation in a wide range of organisms including pathogens, insects, plants, and humans will help us to administer appropriate life saving drugs as well as predict the future of bio-diversity.

In this blog post, I give some background about the evolutionary question I address with the H12 and H2/H1 statistics I developed for the detection of adaptation and some of the results of my application of these statistics to D. melanogaster data. The Python and R scripts that I wrote to identify genomic loci under natural selection and to visualize the genomic signatures at loci under selection are available in the Selection Hap Stats GitHub repository.

For further details about H12 and H2/H1, please see our papers in PLoS Genetics:

Note: Although the blog post focuses on H12 and H2/H1 from phased data, these same scripts can be used to compute G12, G123, and G2/G1 from unphased data, as featured in our recent paper:

Why is adaptation important?

Adaptation is a process in which a species evolves to become more fit in its environment. Virtually all organisms feel the effects of adaptation, especially those experiencing changing environments . For example, the application of pesticides to populations of Drosophila (fruit flies) resulted in the rise in frequency of adaptive mutations conferring pesticide resistance. Another example is the introduction of milk into Northern European diets, resulting in lactase persistence in humans. It is thus essential to identify adaptive events in a wide range of organisms so that we can better understand mechanisms of diseases and various human traits.

What is the genomic signature left behind by adaptation? 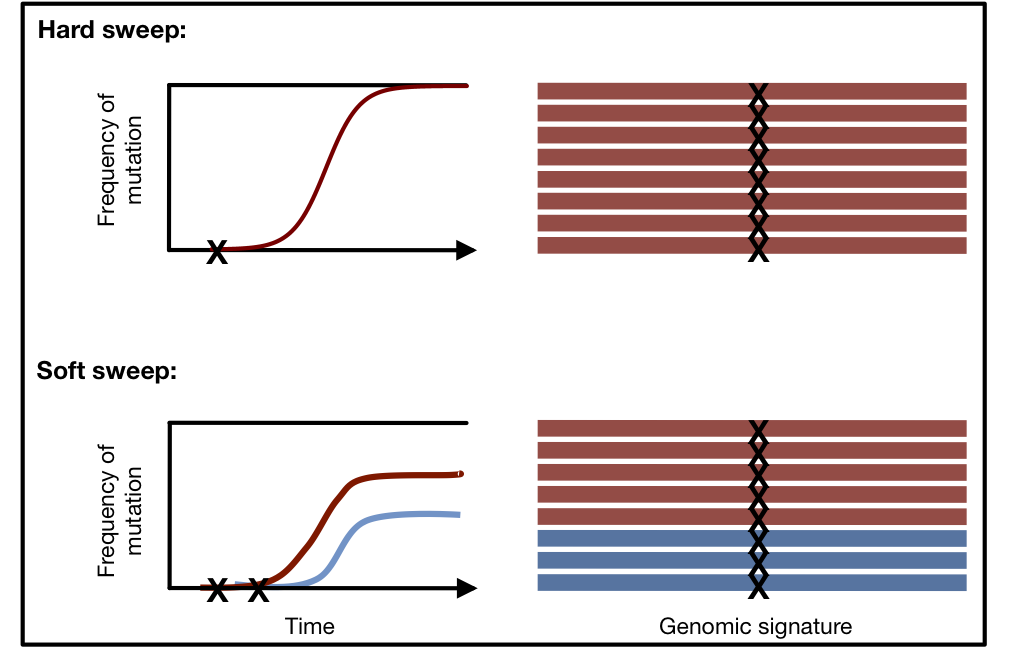 A new statistical method to detect hard and soft sweeps

where pi is the frequency of the ith most common haplotype in a sample, and n is the number of observed haplotypes. However, as we demonstrate in our paper, H1 has better ability to detect hard sweeps than soft sweeps because there will be one common haplotype at high frequency in a hard sweep as compared to several in a soft sweep. To have a better ability to detect both hard and soft sweeps using homozygosity statistics, we developed modified homozygosity statistic in which the frequencies of the first and the second most common haplotypes are combined into a single frequency.

In order to gain intuition about whether a sweep identified with H12 can be easily generated by hard sweeps versus soft sweeps under several evolutionary scenarios, we developed a new homozygosity statistic, H2/H1, where H2 is haplotype homozygosity calculated using all but the most frequent haplotype:

We expect H2 to be lower for hard sweeps than for soft sweeps because in a hard sweep, only one adaptive haplotype is expected to be at high frequency and the exclusion of the most common haplotype should reduce haplotype homozygosity precipitously. When the sweep is soft, however, multiple haplotypes exist at high frequency in the population and the exclusion of the most frequent haplotype should not decrease the haplotype homozygosity to the same extent. Conversely H1, the homozygosity calculated using all haplotypes, is expected to be higher for a hard sweep than for a soft sweep as we described above. The ratio H2/H1 between the two should thus increase monotonically as a sweep becomes softer, thereby offering a summary statistic that in combination with H12 can be used to test whether the observed haplotype patterns are likely to be generated by hard or soft sweeps. 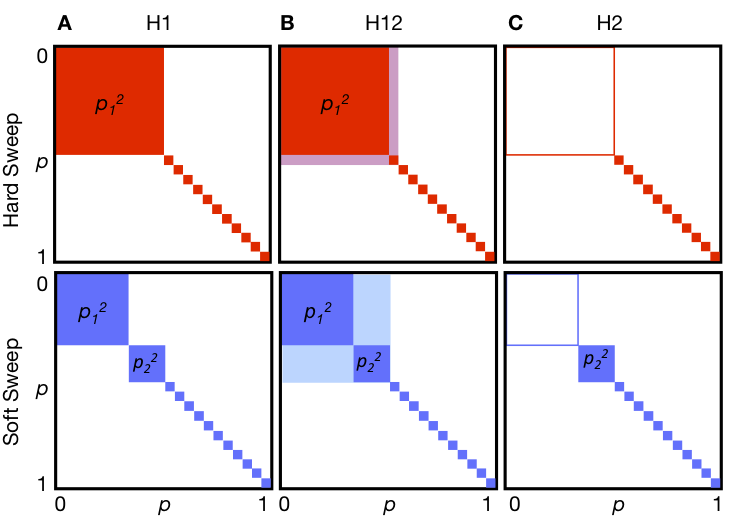 A scan for adaptive events in Drosophila data

The data set that we applied our method to is a population genomic data set consisting of 145 Drosophila melanogaster individuals. We applied the H12 and H2/H1 statistics in analysis windows of 400 single nucleotide polymorphisms (SNPs). Take a look at our scan below. We not only recover three known positive controls where adaptation has occurred, but, we also identify several novel adaptive events.

How do we know if an H12 value is significant?

To assess whether the observed H12 values calculated in the data with are unusually high as compared to expectations under neutrality, the highest H12 value expected under realistic demographic models can be estimated using a program such as msms. This critical value of H12 (H12o) can be then used to identify unusually high H12 values relative to neutral expectations. 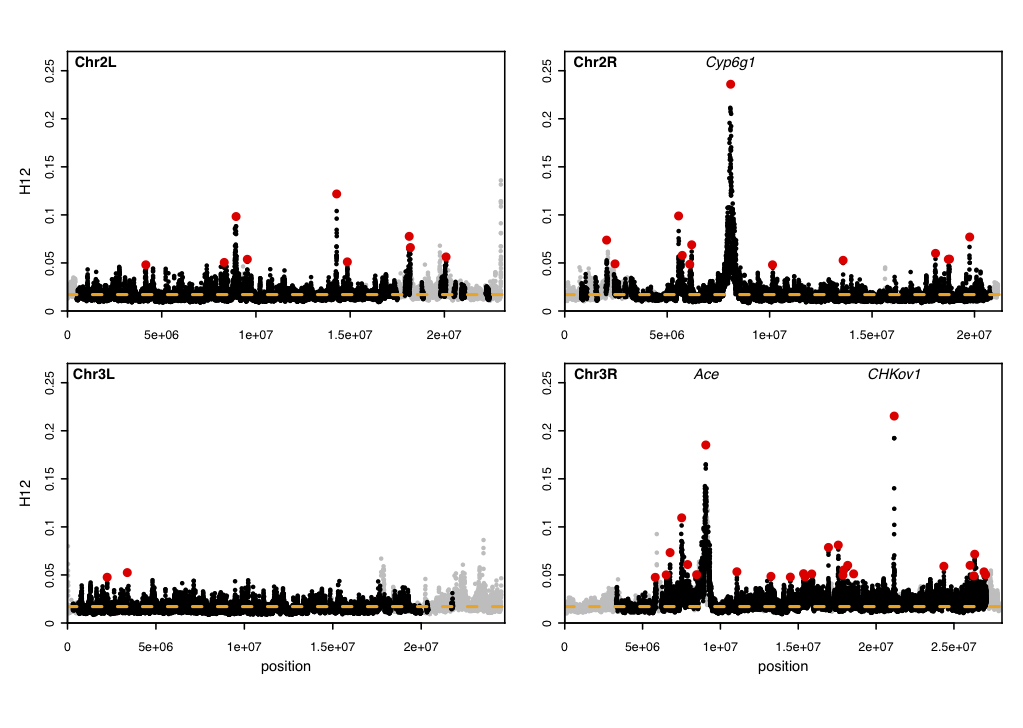 Scan for hard and soft sweeps in Drosophila data. Each data point represents the H12 value calculated in an analysis window of size 400 single nucleotide polymorphisms (SNPs) centered at the particular genomic position. Grey points indicate regions in the genome with low recombination excluded from our analysis because low recombination can generate high H12 values. The orange line represents the highest H12 value calculated under realistic neutral demographic scenarios. Red points highlight the top 50 H12 peaks in the DGRP data relative to the orange line. The positive controls, Ace, CHKov1, and Cyp6g1, are among the top three peaks. This figure was generated with the Python scripts H12_H2H1.py, H12peakfinder.py, and the R script H12_viz.R.

What do individual adaptive events look like in Drosophila data?

To gain intuition as to whether the most extreme candidates for sweeps resemble hard or soft sweeps, we can visually inspect the haplotype frequency spectrum for the analysis window in the H12 peak with the highest H12 value. The R script hapSpectrum_viz.R was written in conjunction with Pleuni Pennings at San Francisco State University (pennings@sfsu.edu). 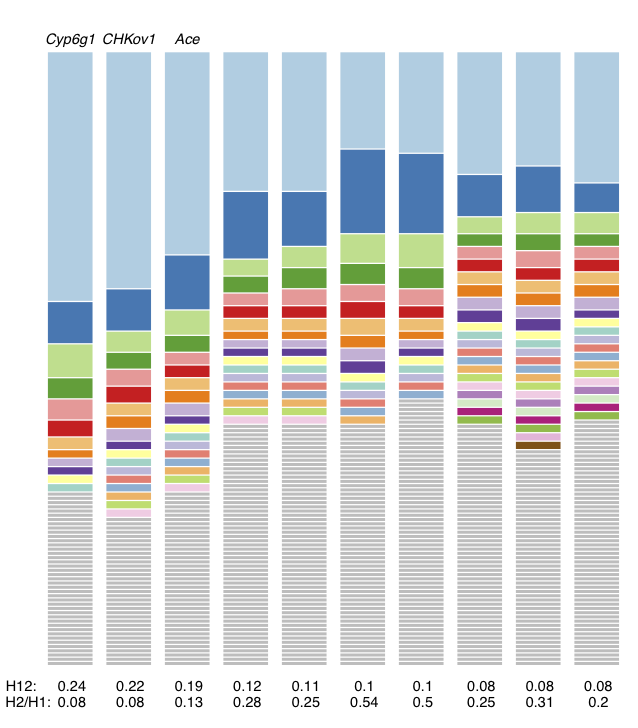 A cool way to visualize genomic data and missing data

So, do the top candidates for adapatation show signatures of hard or soft sweeps?

Take-aways from this work:

1. Adaptation is abundant! In our H12 scan, we not only receovered three known cases of adaptation, but we also identified several novel cases.

2. Adaptation commonly leaves behind signatures of soft sweeps, not hard sweeps. This is very surprising given that the classic model of hard sweeps seems to be the exception, not the norm.

3. Adaptation occurs rapidly! Because soft sweeps seem be common, the input of new adaptive mutations must be very high.