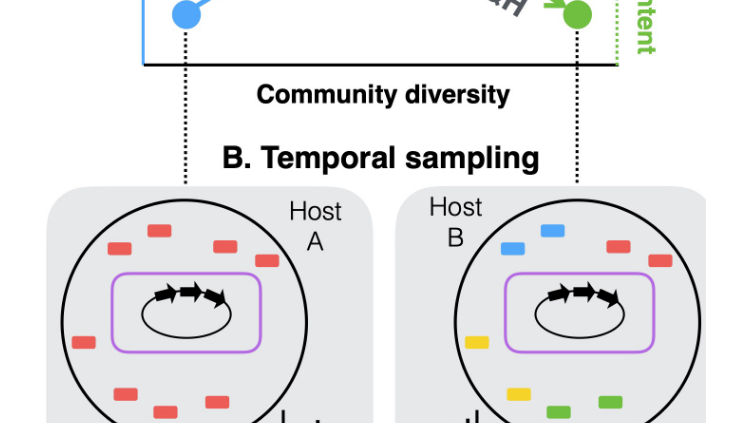 The human gut microbiome contains a diversity of microbial species that varies in composition over time and across individuals. These species are comprised of diverse strains, which are known to evolve by mutation and recombination within hosts. How the ecological process of community assembly interacts with sub-species diversity and evolutionary change is a longstanding question. Two hypotheses have been proposed based on ecological observations and theory: Diversity Begets Diversity (DBD), where taxa tend to become more diverse in already diverse communities, and Ecological Controls (EC), where higher community diversity impedes diversification within taxa. Recently we showed with 16S rRNA gene amplicon data from the Earth Microbiome Project that DBD is detectable in natural bacterial communities from a range of environments at high taxonomic levels (ranging from phylum to species-level), but that this positive relationship between community diversity and within-taxon diversity plateaus at high levels of community diversity. Whether increasing community diversity is associated with sub-species genetic diversity within microbiomes, however, is not yet known. To test the DBD and EC hypotheses at a finer genetic resolution, we analyzed sub-species strain and nucleotide variation in static and temporally sampled shotgun sequenced fecal metagenomes from a panel of healthy human hosts. We find that both sub-species single nucleotide variation and strain number are positively correlated with community diversity, supporting DBD. We also show that higher community diversity predicts gene loss in a focal species at a future time point and that community metabolic pathway richness is inversely correlated with the pathway richness of a focal species. These observations are consistent with the Black Queen Hypothesis, which posits that genes with functions provided by the community are less likely to be retained in a focal species’ genome. Together, our results show that DBD and Black Queen may operate simultaneously in the human gut microbiome, adding to a growing body of evidence that these eco-evolutionary processes are key drivers of biodiversity and ecosystem function. 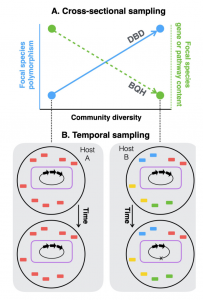